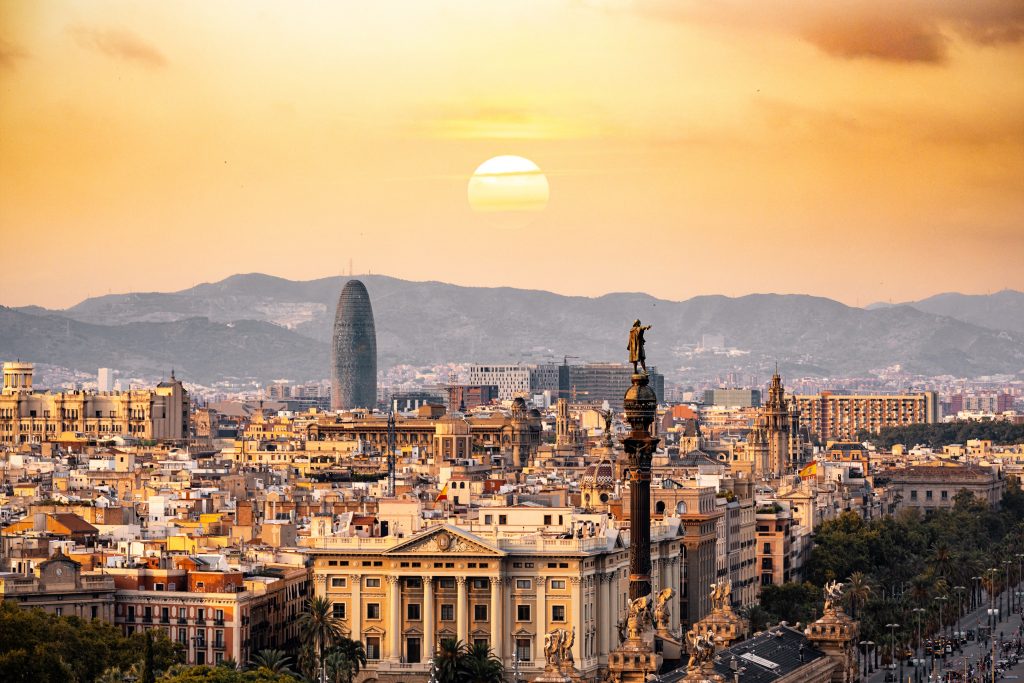 The city was founded by the Romans, although there are legends that say that the city was erected by Hercules, that is, founded by the Carthaginians and that Hannibal himself called it “Barcino”, in memory of his father Amilcar Barca. Throughout its history, Barcelona has been in the hands of Muslims, Christian invaders, carolling, bourbon …

Artists such as Antonio Gaudi, Pablo Picasso, Joan Miro, Luis Domenech and Montaner, Antoni Tapies and many others have left their lives there, creating and making their mark.

The product of such history, as well as the imagination of many creators, especially in the field of architecture and art, have made Barcelona today what it is – a modern European city of recognizable appearance and a world-class tourist destination.

Attractive as it is, it seems that Barcelona is at every turn boasting its sights and beauties. The art that is read from the facades, the history that lies behind every corner and shows in museums, the character and mentality of people absorbed in the streets, markets, stadium…

Here is 8 compelling reasons why you should visit Barcelona:

From Catalonia Square on one side to the Columbus Monument on the other, La Rambla stretched in the shade of wide canopies.

Catalan Square itself is considered the city centre. The spacious square is decorated with floral arrangements and green spaces, decorated with the pavement, numerous statues and two fonts, which attracts the attention of numerous visitors. There are also some of the major city streets, and one of the – La Rambla, extends out to the sea.

The wide pedestrian zone, located between two narrow streets, is not in itself spectacular, but it is very comfortable for easy walking and exploring the city.

In the end, Ramble proudly erects a monument to Christopher Columbus in honour of his first voyage to, it would turn out, the American continent, but also to the memory that it was in Barcelona that he reported to Queen Isabel I and King Ferdinand V on his return from that trip.

At the top of the 60-meter high monument stands a statue of this seafarer, symbolically pointing his    hand at the new world. Interestingly, there is an elevator in the interior of the stairs that leads to its       summit, which offers a magnificent view of the city.

Boqueria Market – a taste of Barcelona

I often advise people to visit local markets, because this is where the contact with people is almost immediate. Markets best reveal the daily lifestyle and habits of the population. So when it comes to Barcelona, ​​we cannot bypass the Boqueria, especially since it is located along the Ramble.

Local bakers, butchers, fishermen and farmers have been gathering here since the seventeenth century to sell their products. This tradition lives on today – fresh fish, meat, pastries, fruits, vegetables and various other products are sold. And as if that weren’t enough, numerous cafes and restaurants are around the market, complementing the overall food and drink offering.

Therefore, if you want to get a taste of Barcelona, ​​Buckery is the right place for you. This colourful mosaic of colourful look tents will capture all your senses.

The Picasso Museum is, without a doubt, the most famous museum in Barcelona. It does not store the most famous works of this genius, however, a unique collection of over 4,000 works represents the key to understanding Picasso’s development from student to world-renowned artist.

Picasso started showing interest in painting very early. He made his first steps in art as a disciple of his father, whose artistic abilities he quickly surpassed – he had his first exhibition at the age of 13!

With its grandeur in physical, tourist, artistic, architectural, aesthetic, and every other sense, the Sagrada Familia stands out from the rest of Gaudi’s works. This cathedral is one of the most representative achievements of Antonio Gaudi and is also one of the most striking symbols of the Catalan capital.

Barcelona’s most visited tourist attraction is visited annually by around 3 million tourists. There are a number of tours that will make bcn travel more exciting. The enormous dimensions of the cathedral, a look that could at least be called quaint, exquisitely decorated and content exterior and richly decorated interior will leave you breathless.

Montjuic – traces of the Olympics

Montjuic is a famous exaltation in Barcelona that owes its name to the ancient Roman deity Jupiter (Mon Jovis, Monte de Jupiter – Montjuic), while others believe the hill was baptized in an old Jewish cemetery that is located there.

Either way, the numerous gardens, gardens, fortress, magical fountain, Spanish village and other attractions make this one of the favourite parts of the city among Barcelona residents.

Montjuic came to the forefront of worldwide attention and interest in 1992 when Barcelona hosted the Olympics, which added to the popularity of tourists.

Tibidabo – panorama of Barcelona in the palm of your hand

Tibidabo is another elevation located in the hinterland of Barcelona. Thanks to this position and height, it offers a fantastic view of the entire city and the sea in the hinterland. Drinking coffee and enjoying the panorama of Barcelona is in itself a good reason to visit Tibidabo.

At the top of the hill is the Temple of the Sacred Heart, built in Neo-Gothic style, with a bronze statue of Christ at its top. Nearby is a nice little amusement park, which is equally enjoyed by toddlers and adults, which runs from March to September.

Barcelona – relaxing on the Mediterranean coast

A long sandy beach with a landscaped promenade in the hinterland is the perfect place to relax and unwind after visiting the city and its sights. Once you replace the concrete under your feet with the sand, smell the sea and refresh the breeze blowing from the Mediterranean, you will understand why Barcelona is among the top 10 tourist attractions in Barcelona.

transformed into a beautifully landscaped beach that the Catalan capital deserves. Barcelona is equally alive day and night and is the most popular among young people.

The beach is, of course, the most visited summer, when during the day you can relax and enjoy the Mediterranean sun with a glass of Sangria, take a promenade or chill in the sea. If you are looking for a night out, you will find it here – numerous bars and nightclubs bring together young people who know how to have fun until the early hours of the morning.

It is almost unthinkable to come to Barcelona and not to visit Guell Park. Colourful, cheerful and playful, this beautiful park will fix a smile on your face as you admire Gaudi’s ability to bring all these shapes and colours into this completely authentic setting.

Guell Park, Barcelona Guell Park is one of the longest and most beautiful benches in the world.

Give yourself plenty of time to explore this masterpiece of architecture that is also part of the UNESCO World Heritage Site and a symbol of the entire art direction. Step into a completely different world, enjoy the city view from the park terrace, rest on the longest bench in the world and visit the famous architect’s house.

In addition to all of the above, Barcelona has a lot to offer and show you. Take a walk through the Citadel Park, visit the Triumphal Gate, the Agbar Tower, the Cathedral of Santa Maria del Mar…

The post Why you should visit Barcelona: 8 compelling reasons appeared first on Pommie Travels.

7 Insider Tips for Your Trip to Montreal