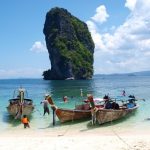 Lessons Learned: Going it alone for the first time can work when: 1. The trip is in your home country where language and currency are exactly what we are used to 2. The distance from home is limited and getting there is easy 3. You can still connect to friends and family if things go wrong.

Lessons Learned: 1. Be wary of short flight connections, such as 45 minutes. Even as in China where there is a 2-3 day “visa waiver” for tourists in transit/brief stays, you still must stand in line for immigration/passport control. 2. Although you may be transferring to another fight with the same airline, you may be required to go to a distant terminal. (My last trip, I was herded off to Gate Z. It was apparently the very last gate in the airport and almost a “bridge too far” when it came to getting to the gate on time.) 3. Look carefully at the city you must go through to transfer. Why? The largest, busiest airports are likely to have longer lines meaning you can be left behind when your flight takes off. I have had this happen in New York where my choice was spend the night to catch a 6 AM flight or take the last train to Washington. I chose the latter arriving in the middle of the night. 4. Try to take a route in one consistent weather pattern. Why is that? In my endless flights to SE Asia, my destination was tropical while I had to transfer via a 40 degree chill in Beijing. When our flight arrived, a planeload of tourists in tee shirts, shorts and flip-flops found themselves deplaning with no gate or jet way. Scurrying down the steps from the plane and dashing across the tarmac to a waiting airport bus, it felt like I had arrived in the Arctic!

Lessons Learned: When you are planning your solo trip, bear in mind that varying the tempo of the trip can make staying abroad longer more comfortable. For example, I like to book a room through our search engine and use that “home base” as the hub from which I travel. That way I can unpack once and have access to day tours from the same spot. Day tours are ideal to give you your own group for sightseeing but with the ability to pick and choose how to spend time on your own special interests.

Lessons Learned: 1. River cruises and tours are a top way to get control of travel expenses since most costs are included. 2. If you are going independently, think about some of the “hidden” costs: Meals add up fast as do tips for guides and entry fees. In some countries, like Russia, there are reduced fees for local residents and much higher charges for foreign visitors. Some countries have “port” or entry taxes on arrival or departure. Lastly, surface transportation can add up as well.

Lessons Learned: If you are planning a ski trip or other sports-focused travel, be sure that the weather is likely to co-operate. For example, the US Southwest is much more likely to have snow that much of Europe at lower elevations.

Lessons Learned: You may be required to get an International Driver’s License (available via AAA). If you have an accident and don’t have such a license, your insurance carrier may reject your claim.

Lessons Learned: 1. If you are filling out a visa application, check with the destination’s embassy if you have questions about the “right” answer/issue raised. 2. Watch your travel dates carefully to avoid overstaying your visa. 3. Read your visa carefully when it is granted. 4. Go to the Internet and to the embassy for your destination to check out regulations for importing/other drugs legal at home. Also watch currency restrictions.

Lessons Learned: 1. On large day tours when you leave the bus, get the mobile number for your guide, and take a photo of your bus showing its number/company name or whatever you need to find it again. The reason this is so important is that buses may drop off a group and then head to a more remote parking area. When there are scores of buses in the area, it can be almost impossible to find the right one quickly. 2. If you are a solo traveler and a meal is included on the tour do find out if space has been allowed for individuals. In one river cruise, when all the tables were set for 8, as a solo, I was left along with other solos competing with couples to find a place to sit. I privately asked the hostess if they could set several of the front tables for an odd number, such as 7 or 9. There was no problem after that! No more “standup buffet!”

Another good way to have your own “team” is to sign up for a class from skiing to diving to perfecting your French. This is an easy way to meet fellow travelers to join for meals or on day tours. Cooking classes in popular areas like Tuscany have morphed into opportunities for social dining. That way you can team up with travelers from around the world for lunch or dinner or to visit a local home for a meal.

Lessons Learned: 1. If you are fairly new at solo travel, plan ahead. Find several options via the Internet and create several days where you have already scheduled a day tour or registered for a short-term class. 2. If you will not have a car, book lodging near the classes you sign up for and/or in the area where you are planning to spend your time. 3. Identify museums, architectural highlights and historic areas where lectures and concerts might be given. For example, at Christmas time this year in the Czech countryside, I found a quaint, small church with a Bach concert one evening. They even offered blankets since the church was unheated! 4. Be aware that while off-season rates may save you up to 50%, some sights may be closed in the dead of winter.

Lessons Learned: 1. Find out about the charity’s work and its reputation. I was fortunate in that I was already familiar with the “Y” having been a member and worked out in their gyms and other athletic facilities.) 2. Become acquainted with the destination where you will serve, its customs and safety. 3. Find out if you can reduce costs by sharing a room and/or obtaining grants and scholarships that may be available.

By chance, my return home was quite memorable. After boarding a flight from Miami on my way to see family, shortly after takeoff the plane had engine trouble. At first there was a loud noise as though we had been hit. The woman in front of me reassured her child that “it was just a seagull”. Not at all reassured, I kept repeating to myself silently “just a seagull”. We were quickly informed that we would be making an emergency landing back in Miami and instructed on “brace position”. Fortunately, no one was injured. The good news is that more and more passengers survive and/or are not seriously injured in such circumstances.

Lesson Learned: 1. It is important to note two exits before takeoff. 2. Be aware during the first few minutes after takeoff and before landing.

10.If your work takes you abroad, become a member of the “bleisure” class: US travelers are leading the pack for combining business and leisure travel. Known as “bleisure”, this fits easily into our lifestyle where almost everyone in the US at some time in their life will be working if not 9-5, for a substantial number of hours each week. In addition, unlike Europeans who take one to two month vacations, many US residents don’t even take all the vacation days they have coming each year. As a result, bleisure trips are a very natural way for US travelers to use this intense focus on work as a way to “borrow” a few days leisure here and there. On most of my holiday trips, I do take a look at how I can add a meeting or look at new business opportunities. In the past, that has taken me through Norway, Sweden and Denmark as well as Australia, Zimbabwe and South Africa. However, this does not always work perfectly. If it is almost impossible to have a really bad day in Paris, on one such “bleisure” trip, I found a way. While staying in a 5-star hotel in Sweden, one of my business associates asked that I take a day trip to Paris. That seemed easy enough. Unfortunately, I failed to realize that this short flight would have all the rigorous requirements of any “international” journey. It all started to go wrong pre-dawn. I waited for coffee to arrive via room service in my hotel. When it never came, I grabbed a cab and dashed to the airport looking forward to the local coffee shop. At that early hour, I had to make do with a coin operated coffee machine. When I had an “on time arrival” in Paris, I headed for the subway. At that point, I discovered there was a massive transit strike. I arrived at the first meeting when it was about half over. Luckily, I was able to make it on time for the second meeting after jogging, briefcase in hand down street after street. When the meeting was over, I discovered a taxi had been waiting for me outside for a half hour with the meter running. The total was far greater than the Euros I had on hand! After waiting 4 hours for a one hour flight, I arrived back at my hotel just in time for a $35 hamburger. There was to be no happy ending to this bleisure odyssey: The proposed terms for the engagement could not be agreed upon so my trip was in vain.

Lessons Learned: 1. Be sure that flight delays and cancellations won’t cause your business appointments to be missed or otherwise implode. 2. Be aware that short connections cross-borders can add hours of delays. 3. Pick lodging as close as possible to key meetings. 4. Allow extra time to get to and from meetings. Road closings and strikes can make it hard to judge the time needed. 5. Always set your own alarm either on your phone or the old-fashioned way by bringing your own alarm clock.

See our upcoming Blog on some of our favorite destinations!