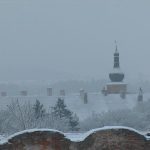 Solo Travel Tips-10 Updates for Europe Now: Here are some new thoughts on “Old World” travel. I am just back from an extended vacation in the Central/Eastern European countryside. I avoided major cities for the most part. As a result, I had a more authentic European feel to my trip. I did not encounter any of our fellow Americans or actually any native English-speakers. I did survive although it was many years since my summer in a German Gymnasium (high school) and a feeble 1 year’s attempt at Russian. I am very pleased to report that I was made to feel very welcome as a “solo” travel. Better yet, I arrived just in time for Christmas markets with handicrafts, gingerbread and “mulled” wine. After 68+ countries visited, I still found new ways to make for a better trip.

Don’t rely on just one Internet/print weather source. I checked repeatedly and found that temperatures were about 10 degrees less than my home in Washington, DC. I dutifully packed two sweaters and wore a heavy coat. The reality? When I arrived, it was too warm for all my layers. To make matters worse, even though I managed to have only a carry-on bag, it was really stuffed. In fact, it was so warm there was little snow. I was glad I hadn’t planned to ski!

Avoid flying the day before a major holiday: If you have to go then, traveling on the holiday itself may be less crowded. In the past, I went abroad on Christmas Day and had found it less difficult. This year I flew home on Christmas Eve Day. It was an overbooked flight, and I was tucked into a middle seat in economy. When the passenger in front of me put his seat back, my video was barely inches away. Eating was more challenging. When I arrived home, I found the chocolate bar from the last meal had fallen in my lap and was now firmly attached to my best pair of gray flannel pants. The bottom line: Everyone will race to get “there” (wherever that is!) on the day right before a major holiday. Just say “no” to that plan, or be ready for a tough trip!

Don’t assume airports, trains and buses abroad will be accessible. I was surprised at the huge Frankfurt, Germany airport that there was no gate/jet way. It meant hobbling down metal stairs to the tarmac while juggling a coat, “one personal item” and a heavy roller bag. If you have mobility issues, contact the airline ahead of time to see how they can assist.

Find out when you book what is the best surface transportation. In the Czech countryside, I found out that having a car was the best way to get around. If you come from abroad, be sure to get an international driver’s license (available in the US at select AAA offices). If you fail to do so and have a wreck, your insurance claim may be denied. If you won’t have a car in Europe, compare train schedules and prices for best routes. I was surprised to find that buses worked better on my last trip than trains.

Be aware your electronics can hit a glitch. I always pack both an adapter and converter although many hotels have loaners but still had a major hardware problem with my tablet. For a full week, it refused to take a charge no matter what cable, charger or converter/adapter was used. It was my one source as an e-reader and camera and for checking emails. Out of the blue, it decided to get back into the game during the second week once again taking a charge.

Don’t overstuff your roller bag. Why? 1. Your airline may weigh your bag even it meets the size to go on board. On China Air heading to Cambodia, only 11 pounds was allowed. Since the suitcase and metal wheels weigh several pounds, it was really hard to pack for a 17 day trip. 2. You should save room for local purchases. 3. On your flight, tossing a bag into the overhead bin is no mean feat. The lighter the better. (In Europe, I was told the flight crew was not allowed to help. Luckily, I found a willing passenger to get my roller bag into the bin on each leg of the trip.)

Breakfast on the run: No fan of expresso? Pack individual coffee bags and hot chocolate mix as creamer. I found out that ordering “American coffee” didn’t always work well. Although guest rooms in 4 and 5-star hotels tend to have coffee makers or tea kettles, I didn’t like some of the coffees offered in guest rooms.

When booking, look for lodging for “1 adult” not “1 room”. The latter or “rack rate” is found in the US and many other locations. However, in Europe a solo-priced room is common. Be sure that the size and amenities are what you are looking for. When I booked a “standard” room in a 5-star hotel, it was scaled back as basic economy referred to as a “comfort room”. I asked for a room change within the hotel and found a “single” room at the same price with all the missing features. Don’t be afraid to ask.

Small coins can have a big significance! So have a mix of change, and learn to recognize each one! I found this out the hard way. Twice in the Czech Republic in one day, I was locked out of the restroom (“WC”/”Toilet”). The first time I had the wrong change for an automatic entry gate. After several false starts,  I managed to get the coins that worked. Having been thwarted that morning for not having enough local currency, I came prepared this time. Better yet, I was pleased to see that unlike the puzzling machine operated gate, there was a custodian making change. Although I had an array of Czech crowns in multiple denominations, I was refused entry yet again.  Now what?  The custodian rejected my local currency as too large a bill to change! Although I never gained entry, she did hail me a cab to my hotel.

In Central/Eastern Europe, do plan to dress up to eat out in the evenings, especially on weekends. I had read in Lonely Planet that if you don’t do this everyone will know you are a tourist! One evening I watched as chic women arrived for dinner in black dresses, stockings and heels. Across the room in my apres-ski boots, I wished I had made more effort. It isn’t easy though to pack light and go from day to evening. However, I did have one option that fit in my carry on: black slacks, gold flats and an evening sweater.

As a solo traveler in the heart of Europe, I found a really warm sense of belonging. I never once saw the maître d’ wince when I said “a table for one”.  Lesson learned:  Plan your next solo trip to combine top urban areas/major capitals with time in the countryside!

Why Stopping At Kuala Lumpur Is Wise