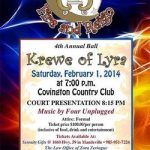 Excitement is building for Mardi Gras. It is famous worldwide for fun and what could be better than the Mystic Krewe of Mardi Paws! K-9 royalty lead the way in all their finery primarily in full Mardi Gras colors of  purple, green, and gold and beads with “escorts” similarly attired. This “Parade with a Purpose” raises money for charity.

While New Orleans is the most famous US Mardi Gras celebration, Washington has for 60 years hosted The Mystick Krewe of Louisianians. Having attended in the past, I still sport a treasure acquired there: A souvenir trinket (known as a “throw”), a long strand of  “pearls” mixed with bright orange crawfish and finished off with a large fisherman’s boot!

The first recorded New Orleans Mardi Gras “Carnival”,  pre-Lenten celebration, dates to 1781. Fifty years later, the festivities were in full swing. By mid-19th century the fabled Mistick Krewe of Comus was formed bringing floats and masked balls and within two decades the addition of “throws”.

If you can’t get to Mardi Gras in New Orleans this year, follow it on the Web!

Ecuador and Galapagos to suit every time scale