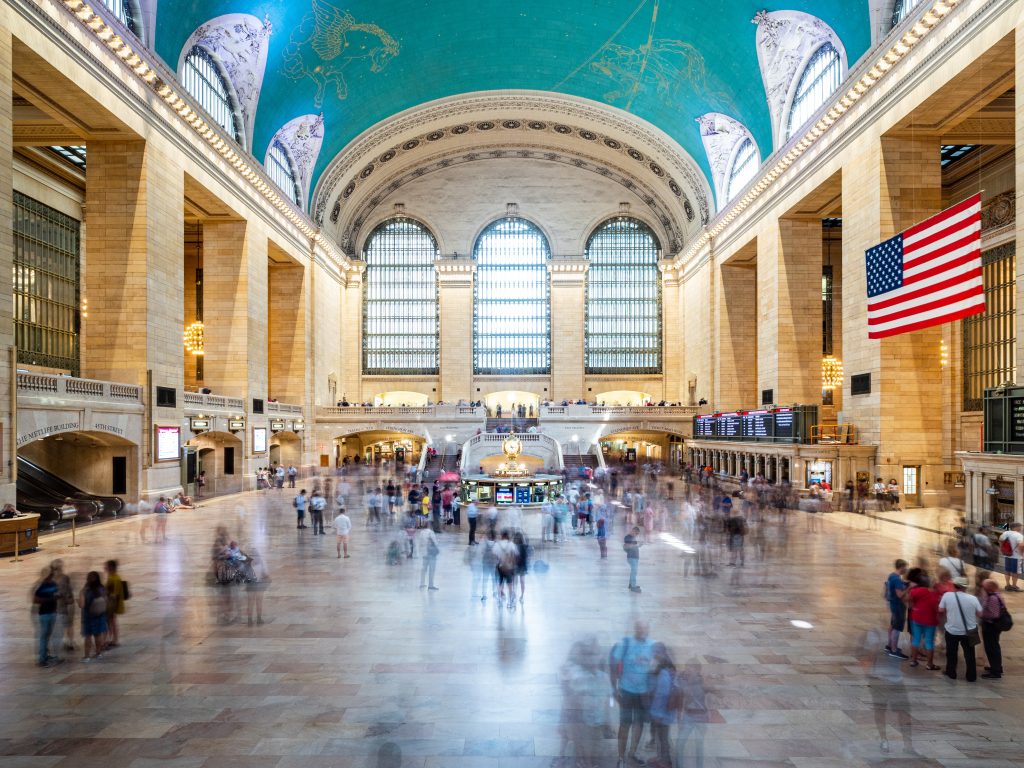 Grand Central Station is somewhere you should explore at least once in your lifetime. Even if you’re just there between other commitments in New York City, store your luggage in Grand Central and take the time to soak in all the history and beauty of this building.

An Overview of Grand Central Station

Grand Central Station (which is officially known as Grand Central Terminal), is a building in midtown Manhattan, designed in the breathtaking Beaux-arts style. It was originally opened in 1913 and underwent a renovation to ensure it maintained its original glory.

Grand Central is a stop for many tourists, and it’s also a hub of transportation in the city.

Visitors and commuters come to Grand Central by the Metro-North trains, which travel along the Harlem, Hudson and New Haven Lines. They go to destinations like the Hudson Valley, Westchester, and Connecticut.

Grand Central is also a hub for subway travel, and service includes the 4/5/6/, 7, and S lines.

Millions of commuters pass through Grand Central every week, and it does transport you to a different era.

When you’re in the main concourse, while there may be a crush of crowds around you, take a minute to look up where you’ll see the cathedral ceiling with blue-green illustrations and heavenly-inspired art.

Each day around 140,000 commuters go through Grand Central, and there have been several times in history where demolition of Grand Central was planned, but now it’s a protected landmark in New York City.

Grand Central Terminal is one of the most visited spots in New York City behind Times Square.

The benefactor of the station was Cornelius Vanderbilt, and thee zodiac illustrations on the ceiling are meant to provide a divine perspective.

The most recognizable landmark of Grand Central is the clock, which is in the Main Concourse. It’s set by the atomic clock at the U.S. Naval Observatory, and it’s located above the station’s central information booth.

If you go to the iconic Grand Central Oyster Bar & Restaurant, there are low arches with ceramic tiles surrounding it. It creates unique acoustics so that you can talk to someone who’s standing in the corner opposite you.

The bar and restaurant itself is around 100 years old, and in addition to the namesake oysters, you might also want to try a bowl of clam chowder.

Another option if you want to be transported back in time is The Campbell Bar.

The Bar was once the private office of John William Campbell.

The Bar still maintains its original grandeur which includes a stone fireplace, a leaded glass window, and the original millwork.

The ceilings are hand-painted, and the bar is still home to Campbell’s own steel safe.

A more under-the-radar part of history that is still in Grand Central is the Annex. It includes a publicly accessible tennis court that was once home to a TV studio for CBS and an indoor ski slope.

The food hall is inspired by Nordic fare and culture, and purveyors bring in fresh, seasonal foods from the local region. It’s the only Danish food hall in New York City, and it was created by Claus Meyer.

Grand Central Market is a European-style shopping experience located between the Graybar building and the 4/5/6 Subway lines on Lexington. If you’re commuting, you can stop by and pick up items you’ll need for dinner, and if you’re a tourist, it’s a beautiful market to check out.

There are 13 local vendors at the market, and you’ll find 400 different types of meats and cheeses and 160 types of seafood.

The merchants are entirely local businesses, and most of their products are also locally sourced.

Artisans showcase their locally and American-made items so you can shop for gifts, and the artisans who display are carefully curated.

There are different price points, and you might find toys, home items, art, and accessories.

There are around one million shoppers who visit the Holiday Fair.

If you’re planning a trip to NYC, Grand Central should be on your list of must-sees.

The post Everything to Know About Grand Central Station appeared first on Pommie Travels.

Why you should visit Lapland

Hotel Not Hotel: A Unique Stay in Amsterdam West