Rooted in Indigenous traditions, Panama’s epicurean heritage has many layers due to the arrival of Spanish colonists, enslaved peoples from Africa, Chinese railroad laborers and the French, West Indians, Europeans and Americans who worked on building the Panama Canal. This exchange of ingredients and cultures has evolved over time, and now the gastronomy of this Central American country has become distinctly Panamanian. 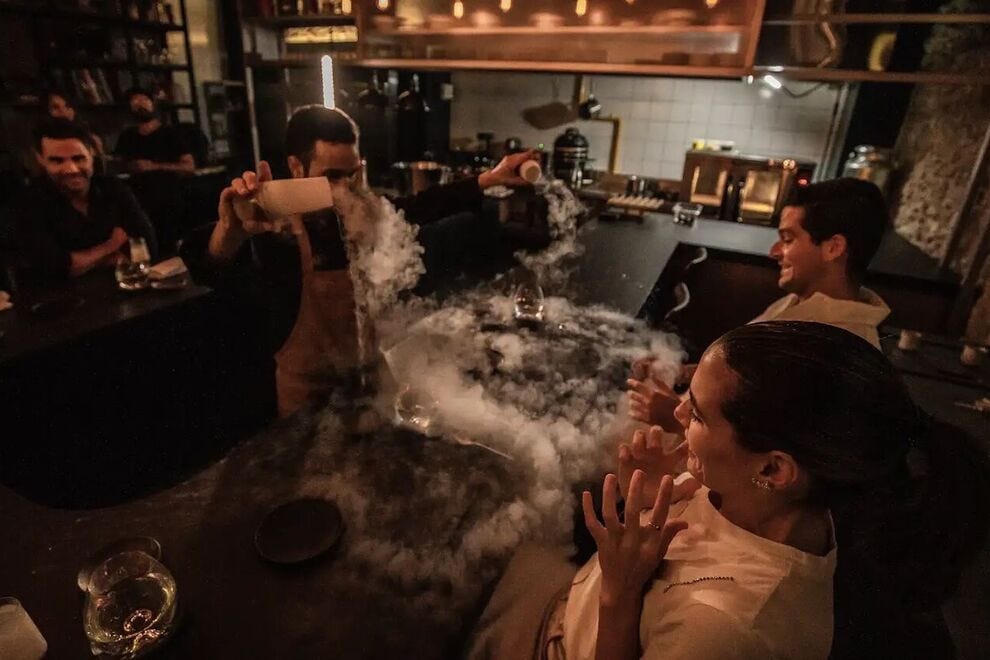 As one of the UNESCO Creative Cities of Gastronomy, Panama City reflects this accolade within buzzing restaurants and bars, longtime establishments and traditional cart vendors. This capital city has become a hot spot for young talented chefs making names for themselves with their contemporary twists on traditional dishes.

Among them, chef Ariel Zebede runs A to Z, a fully immersive, pop-up experience in Panama City with a multi-course chef’s table tasting menu. Zebede draws upon his Panamanian upbringing and time in restaurants in New York City and Los Angeles to put on an artistic culinary showcase. Panamanian specialties are served up with a twist, such as almojábanos, a fried corn and cheese treat.

Zebede said he and his staff like to change things up “because we always say like you have to innovate. You can bring it back eventually, but it’s always a good change for the creativity of the restaurant.” 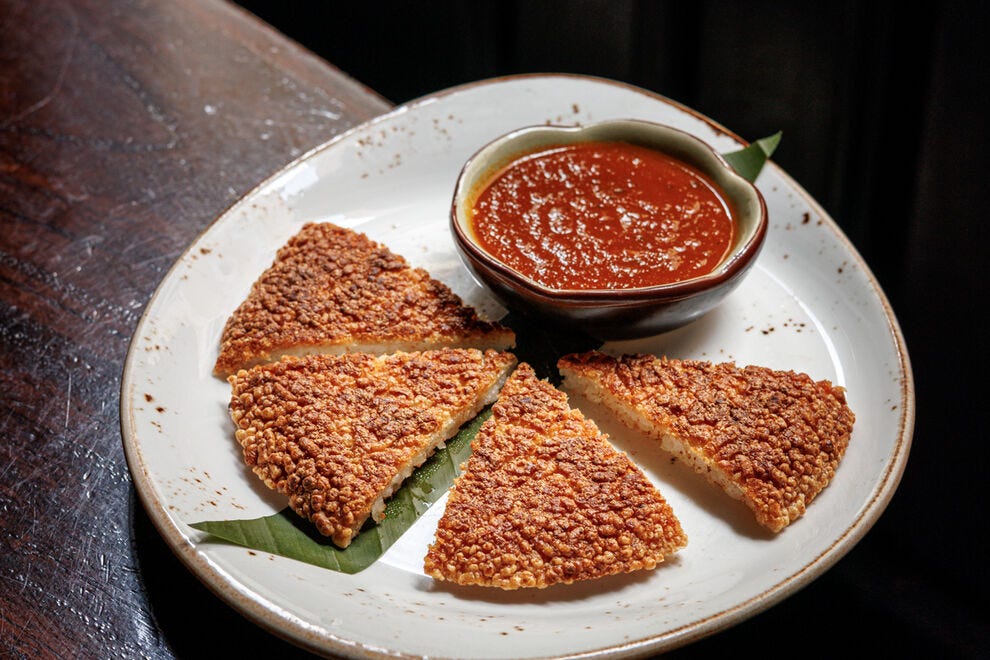 Carles’ Fonda Lo Que Hay plays up Panamanian foods with a sharable plate menu. To start, “Concolon Sexy” adds a tantalizing name to this dish of pan-stuck fried rice, along with a smoky tomato sauce. His dessert selections could incorporate a raspao, an icy treat in a choice of fruity syrup flavors and with condensed milk.

Carles points to fellow Panama City restaurants, including Maito and El Trapiche for their influence, but also acknowledges chefs who are viewed as Panama’s culinary pioneers. He describes gourmet chef Cuquita Arias de Calvo, who owns a restaurant in Panama City, as “the queen of new Panamanian cuisine.” Cookbook author and hotelier Charlie Collins is also seen an epicurean ambassador. 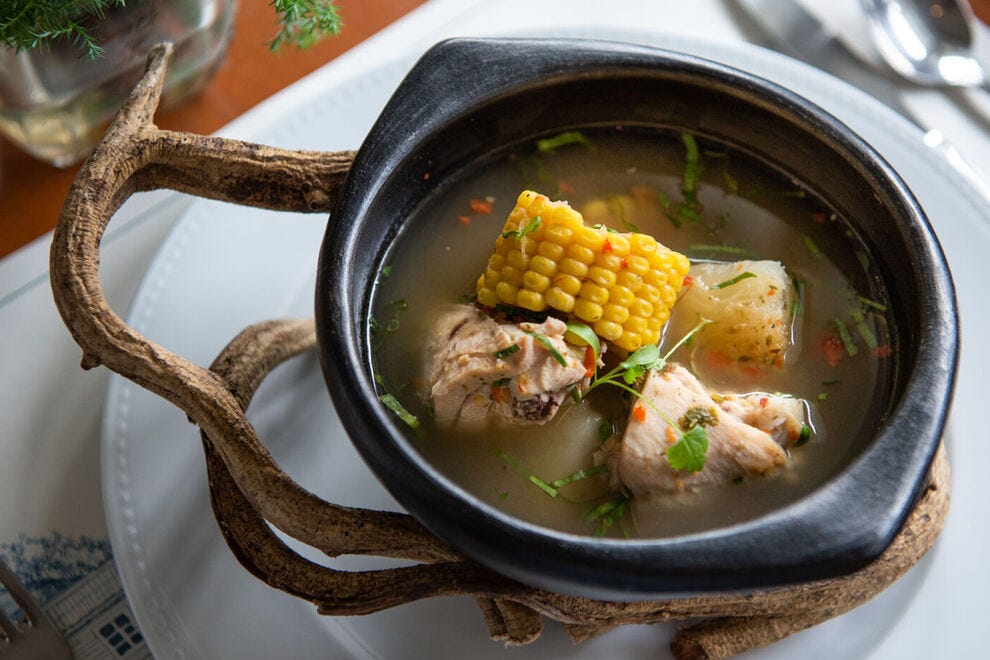 Charlie Collins, chef and owner of Hotel Panamonte in Boquete, a town in Panama’s Chiriquí Highlands region, is the author of the culinary anthology, “T’Ach: Authentic Panamanian Cuisine.” In it, Collins traveled throughout his home country and captured both the essence of its regions and recipes of Panamanians on his pages. He explained that Indigenous culture contributed local fruits and root vegetables that still play an important role in our cuisine.

“As a country, Panama is very regionalist, each region or province has its cooking customs and culture,” said Collins. “Chiriqui is the breadbasket for Panama and is always producing the very best ingredients, constantly innovating with new produce, which are contributing to shaping the New Panamanian cuisine combined with our rooted heritage and culinary traditions.” 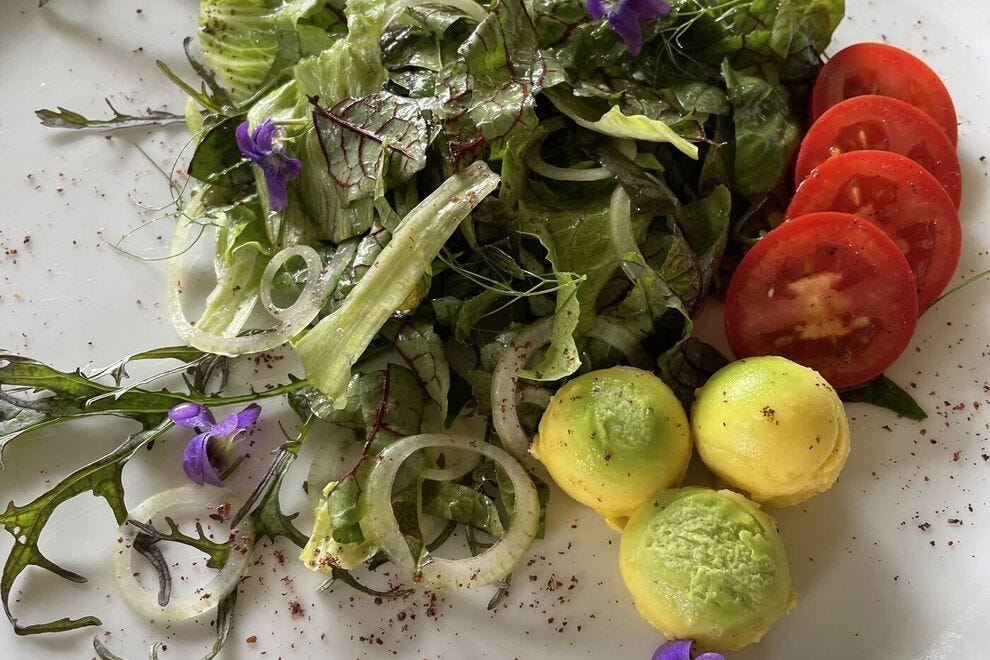 Patricia Miranda-Allen is the chef and proprietor at Cerro Brujo Gourmet, in the town of Volcán. Open since 1999, Miranda-Allen works with sustainable gastronomy and cooks mostly with local vegetables from area farms, which are abundant. She sources pork, chicken and lamb locally, plus lowland trout. Instead of a printed menu, the day’s orders are written on a chalkboard.

“To me, it’s logical to cook with [these] ingredients,” she explained. “It’s just a very natural way of cooking food that I have around me.”

Miranda-Allen’s on-property garden provides herbs and lettuce, caigua, eggplant and other types of vegetables for her cooking. An outdoor kitchen space accommodates Fogon de Mis Amores, a cooking school founded by Miranda-Allen that teaches the Ngäbe community’s women and youth. 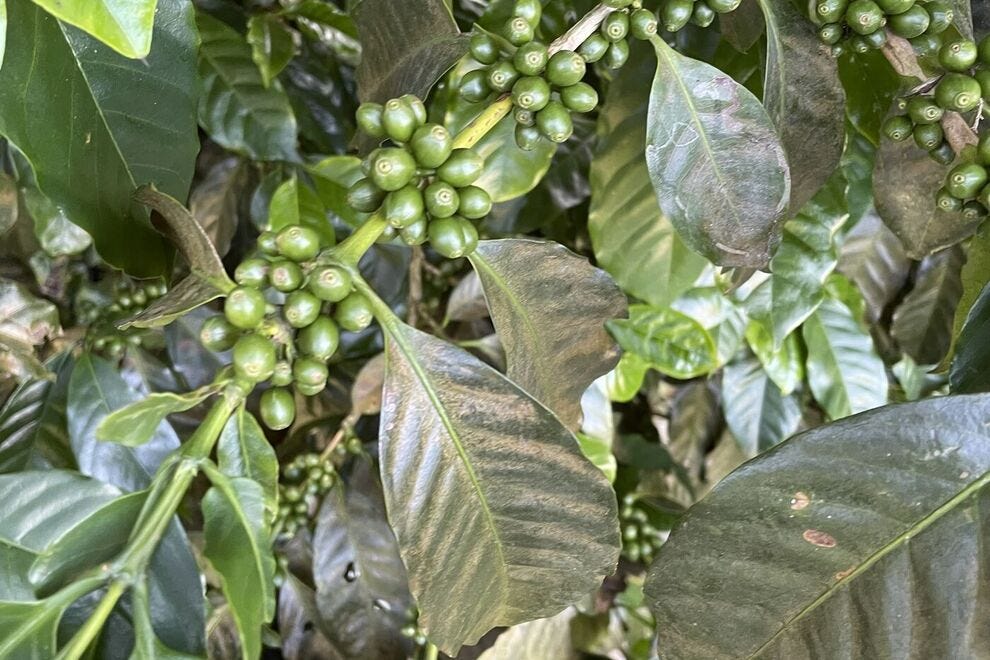 Panama’s coffee farming also happens within the Chiriquí Highlands. This province marks the highest point in the country and its rich volcanic soil and comfortable temperatures make it ideal for raising these plants. The most recognized variety is Geisha, an Arabica bean originating in Ethiopia and brought over to Panama, and it’s known for its sweet floral notes.

Most coffee farms in these highlands offer public tours; Visit Panama’s website lists information on many of them. They include Boquete Tree Trek, a mountain resort that runs not only a Geisha coffee tour but also on-site nature outings (go on their hanging bridges excursion).

Don Pepe Estate Coffee, dating back to 1898, starts their tours amid their coffee plants and concludes them within their tasting room for sampling Geisha, Pacamara and other coffees. 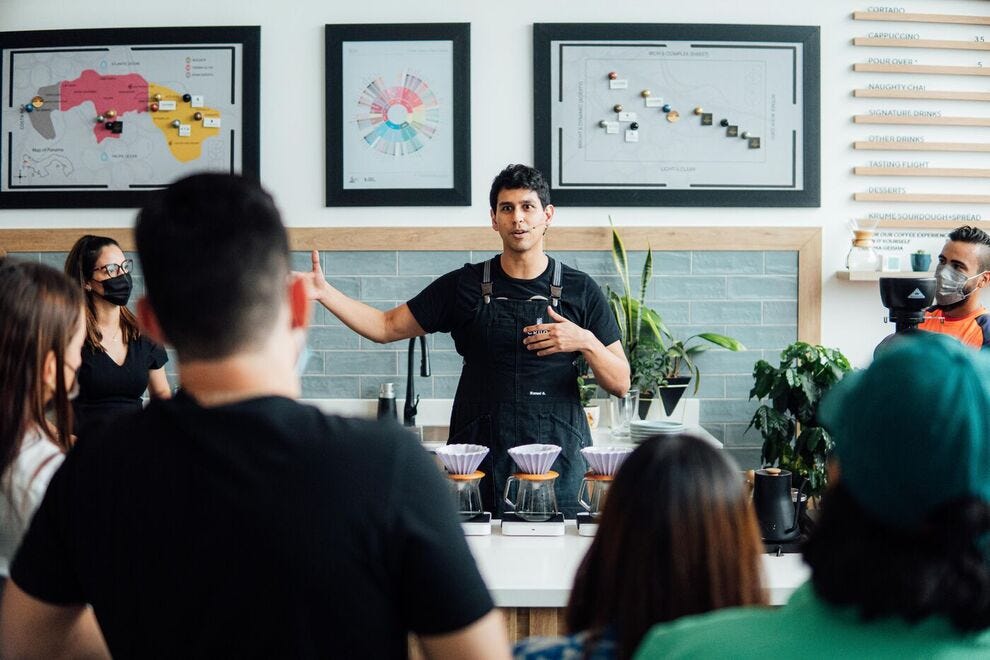 At their factory, Cruce Coffee Company roast and inserts ground coffee in aluminum-based K-cups. The company sources beans from farms in three Chiriquí Highlands regions: Boquete, Volcán and Renacimiento. The staff at Cruce Coffee also lead seminars, such as their “Panama Coffee Experience” that identifies flavors linked to certain beans and roasting processes. Afterwards, order a beverage from their coffee bar. 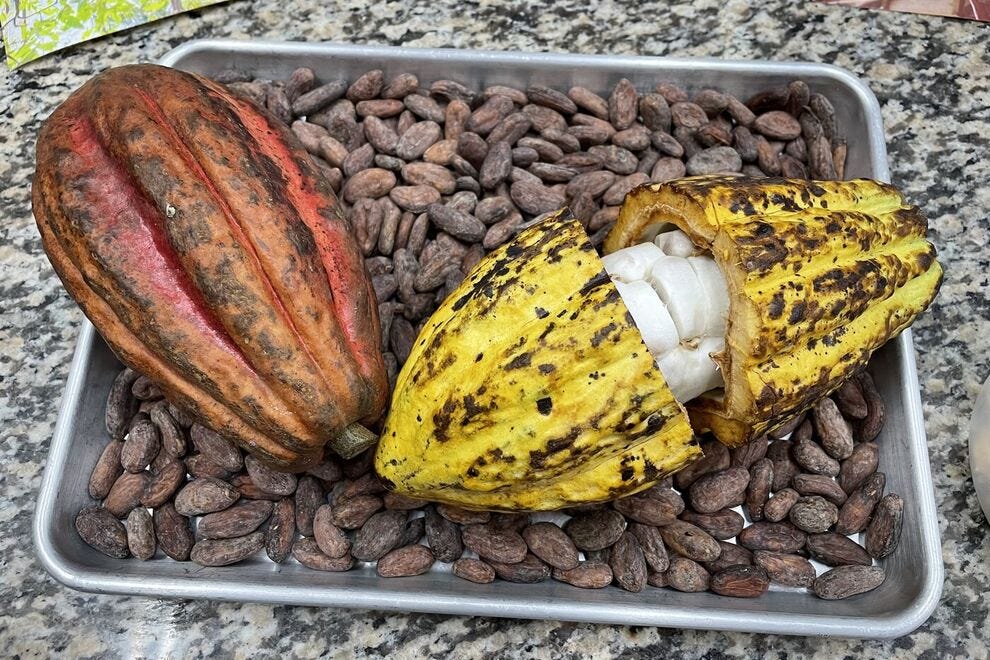 Panama also produces cacao for chocolate production, grown in locations such as the province of Bocas del Toro. You can purchase Panamanian-made confections at candy shops and from chocolatiers.

Located in Panama City, and named after an Indigenous chief, Nomé Chocolate provides a solid “bean to bar” lesson within their factory kitchen. The staff at this Panamanian artisan chocolate maker shows each step in their process of making customized candy bars and colorful flavor-infused bonbons. 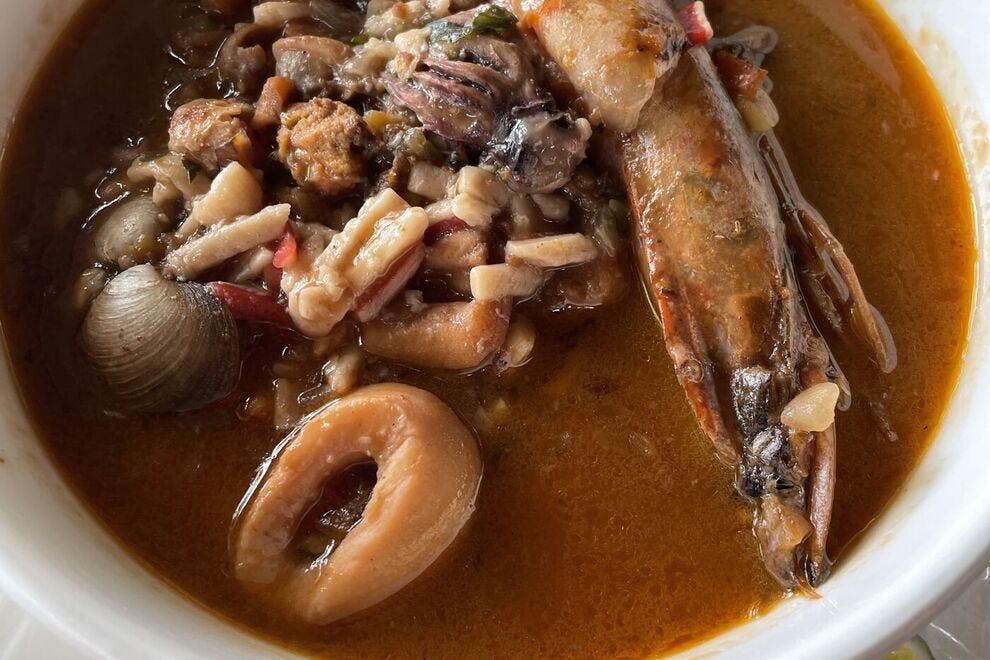 Along with other nationalities that have enriched Panamanian cooking, Afro-Panamanian heritage remains a key ingredient. The term “Afro-Panamanian” refers to those of African descent and is linked to two categories. “Afro-Colonials” refers to those who descended from the enslaved peoples brought over during Panama’s colonial period. “Afro-Antilleans” relates to those who migrated from the Caribbean to Panama as laborers on the Panama Canal and other construction projects. In the present day, Afro-Panamanian culture thrives in particular in Colón, a Caribbean province.

Caribbean flavors and ingredients, including fresh seafood, are a major part of Afro-Panamanian cuisine. At El Bongo in Colón, customers can order specialties ranging from octopus ceviche to fried fish with coconut rice. Try the Cazuela de mariscos, a seafood stew prepared with coconut milk. 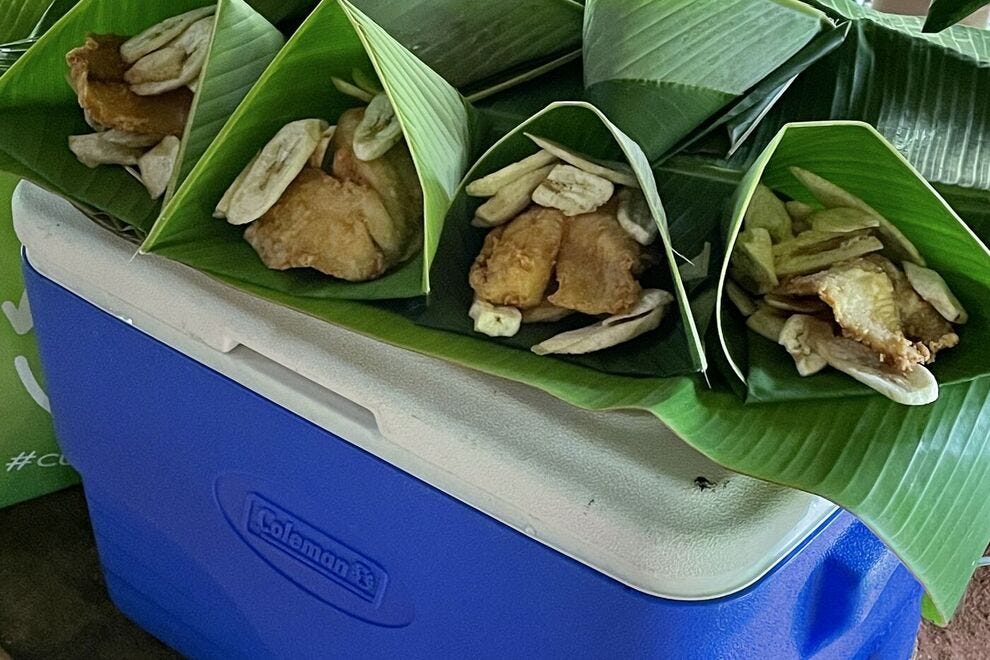 Panama’s Indigenous communities have also contributed to the foundations of Panamanian cuisine. Some groups are open to tourism-related visits and introduce aspects of their culture, such as sharing a traditional meal.

In Rio Caña, travelers can schedule a visit with the Ngäbe-Buglé people, and prepare dishes alongside the women of the village, who are this community’s expert cooks. The diet of the Ngäbe-Buglé people includes fresh-caught fish, self-harvested root vegetables and other ingredients such as “dachín,” an endemic leafy vegetable used in pastes and salads. A visit can be booked via SOSTUR, Panama’s community tourism network.

The Emberá people, who reside along the Chagres River in the Panama Canal watershed, also permit scheduled tours of their village; a lunch for visitors is prepared.