—This article is sponsored by GetYourGuide. If you make a purchase by clicking one of the links, we may earn an affiliate fee. 10Best operates independently, though, and this doesn’t influence our coverage.

With its array of museums and galleries, New York City is a treasure trove for art lovers. Many culture vultures never stray beyond the island of Manhattan. However, those who venture across the river to nearby Brooklyn will be richly rewarded. The venerable Brooklyn Museum opened here in 1897, before the borough was even part of New York City.

Housed in a spacious Beaux Arts structure along the edge of leafy Prospect Park, there’s plenty of room for social distancing among the encyclopedic collection of approximately 1.5 million works. Get acquainted with its latest blockbuster exhibit, Virgil Abloh: “Figures of Speech” and the permanent collection as you plan your visit. 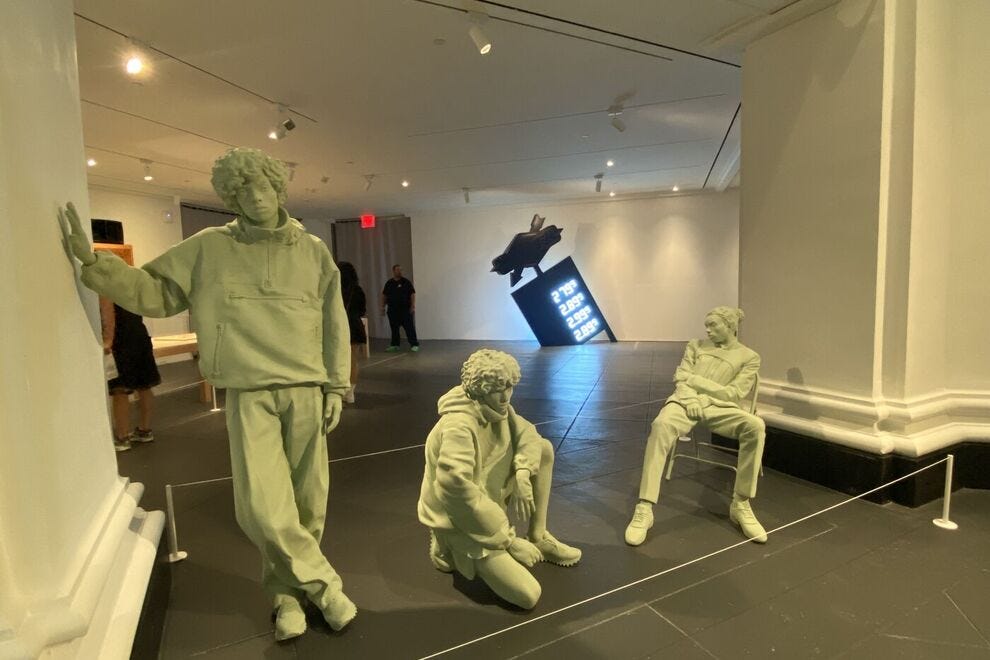 Examples of streetwear are plentiful — Photo courtesy of Allison Tibaldi

This multimedia exhibit dives deep into the work of trailblazing artist and designer Virgil Abloh, who died of a rare form of cancer in November, 2021. Best known as the artistic director of menswear at French fashion house Louis Vuitton and his own brand Off-White, the show pays homage to Abloh, who successfully tackled established rules as he bridged streetwear and high fashion.

It’s an interdisciplinary celebration of his creativity across the spectrum of art, music, architecture, fashion and beyond, featuring over two decades of his work. Although this is a posthumous exhibit, Abloh was an active participant in nearly all aspects, right up until his untimely death at age 41.

Get tickets for Virgil Abloh: “Figures of Speech” »

The “Social Sculpture” is a full-scale house 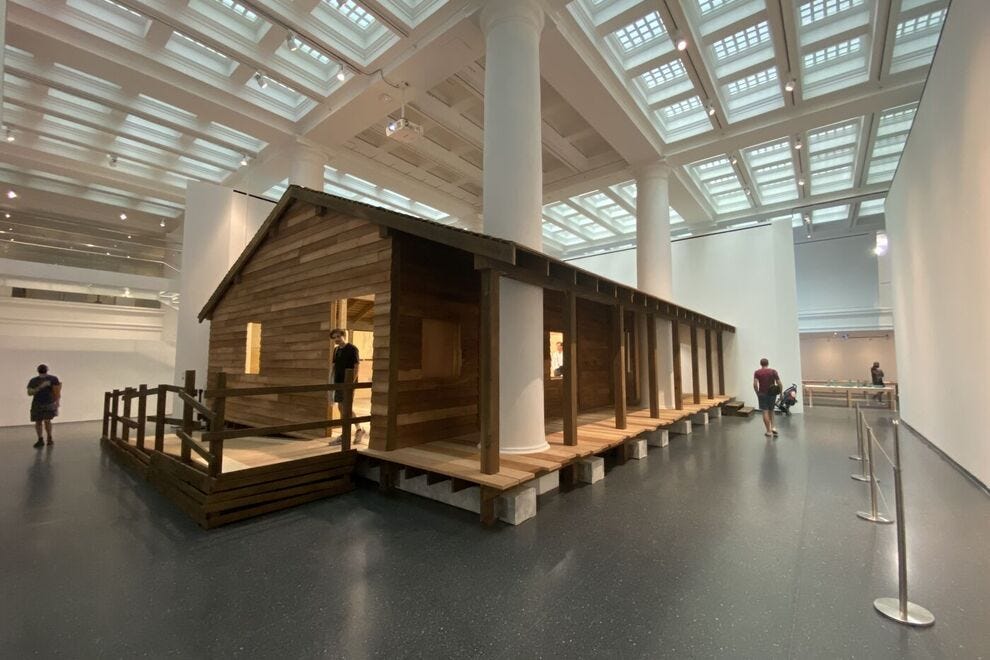 Pulling from Abloh’s training as an architect, a full-scale wooden house, “Social Sculpture,” is a focal point.

Constructed to counter the lack of space afforded to Black people and Black artists in cultural institutions, it is used for gatherings and events not usually found in museums. A robust rotating lineup of public programs and workshops align with Abloh’s deep commitment to community, his fundamental desire to include a broad spectrum of people in the conversation and his belief that the exchange of ideas inspires creation.

“Social Sculpture” invites all museumgoers to enter and explore from the inside, challenging the traditional concept of viewing art at a distance. 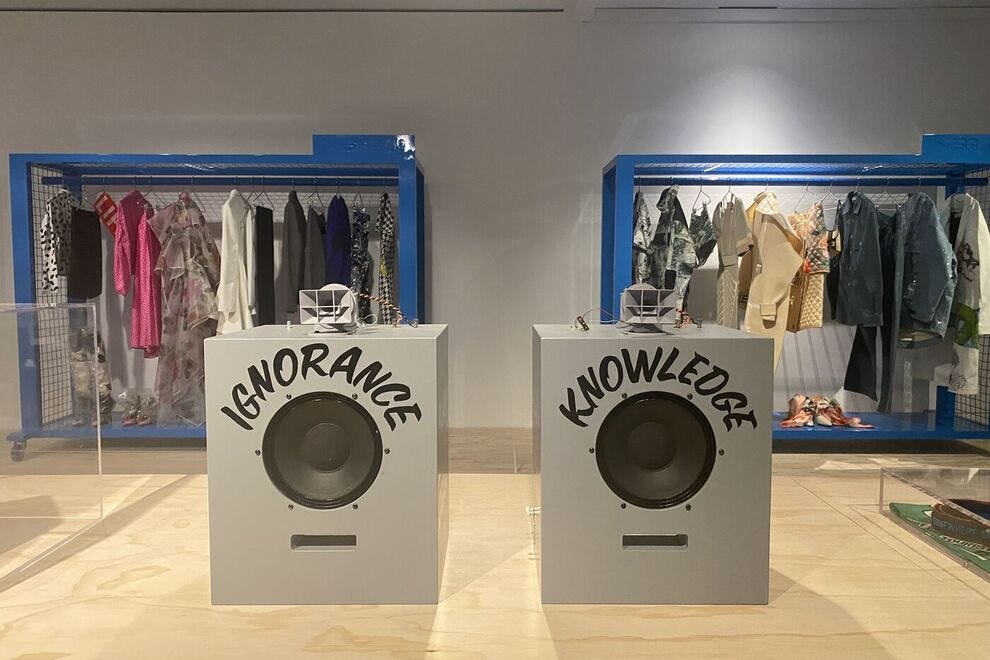 Abloh is best known as a clothing designer, and fashion figures prominently, right down to special T-shirts and green sneakers designed for the security staff. There are plenty of hoodies and denim side-by-side with showstopping gowns.

Sneakers are works of art 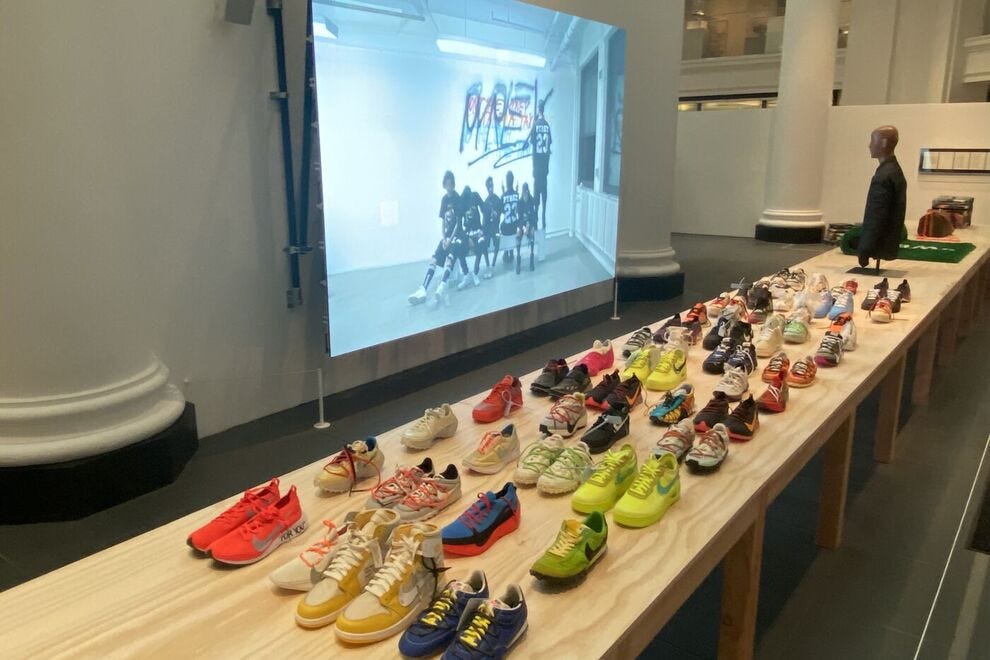 Sneakers in bold colors are displayed on custom-made plywood tables that can be seen as a metaphor for a runway. Videos from Abloh’s striking fashion shows and a dynamic soundtrack add powerful dimensions to an already nuanced exhibit. 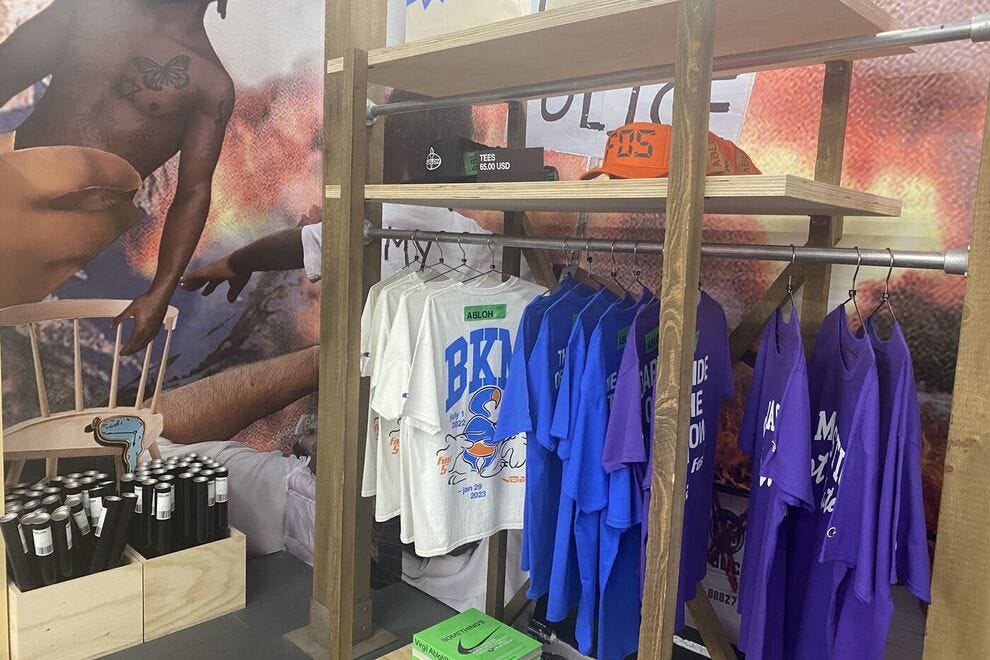 Abloh’s work merged art and commerce without excuse, making little distinction between the two. The exhibition’s shop, Church & State, functions as an extension of the show, further blurring the lines as it reinterprets the cultural impact and significance of streetwear. Eye-catching new merchandise drops regularly, drawing eager fans to visit multiple times as they purchase a piece of fashion history. 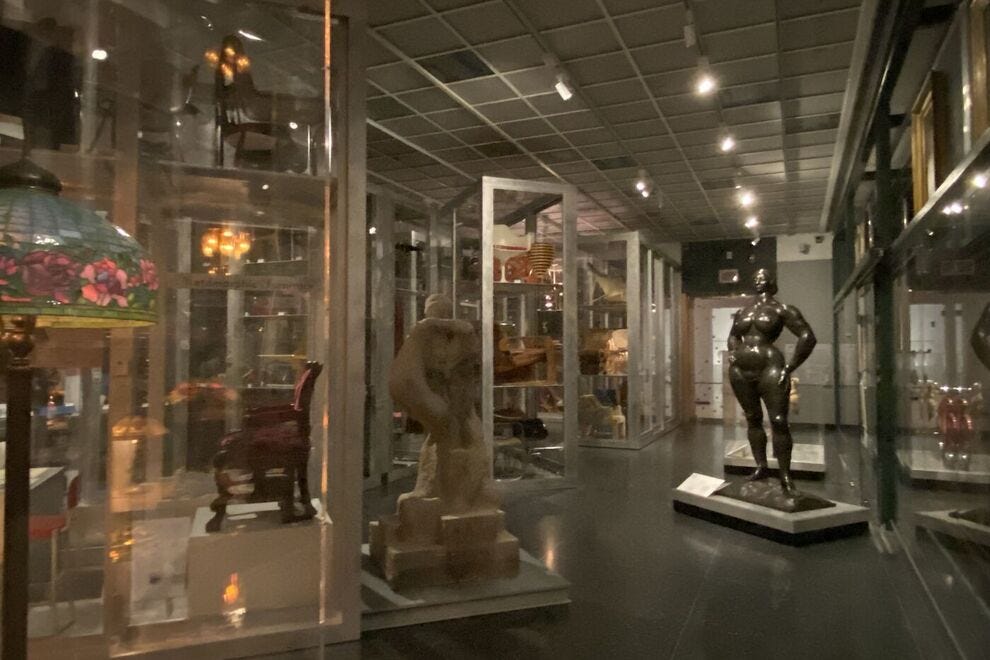 Before or after visiting Virgil Abloh: “Figures of Speech”, take some time to explore the rest of the museum.

The Elizabeth A. Sackler Center for Feminist Art is dedicated to raising awareness of the feminist voice and its contributions to the art world. The centerpiece is “The Dinner Party,” a seminal installation by artist Judy Chicago. It’s comprised of a massive ceremonial banquet with 39 place settings at a triangular table, each commemorating a significant woman from history and elevating female achievement to a height once reserved for men.

The Egyptian galleries are internationally respected. With over 1,200 objects, there’s much to see. Of special significance is the Mummy Chamber, where rituals related to mummification and the Egyptian belief that the body must be preserved to ensure eternal life are explored.

The decorative arts collection touches on a wide range of schools spanning from the 17th century to the present, putting a reflection on the changes in domestic life and design. A dome-shaped Tiffany lamp with a band of frolicking dragonflies around the rim is one of the highlights. Head to the 5th floor for the Visible Storage and Study Center, where thousands of American-made decorative objects are held in viewable storage, offering a glimpse at the extensive scope of the museum’s holdings.

The Luce Center for American Art challenges visitors to reexamine what constitutes “American” art as it addresses the inequities in our country. Once-dominant narratives from Western art are questioned in a thought-provoking manner that may spark complex conversations. One of the galleries has been developed in partnership with the Lenape people, Brooklyn’s original inhabitants, who lived in the region for thousands of years before colonizers. 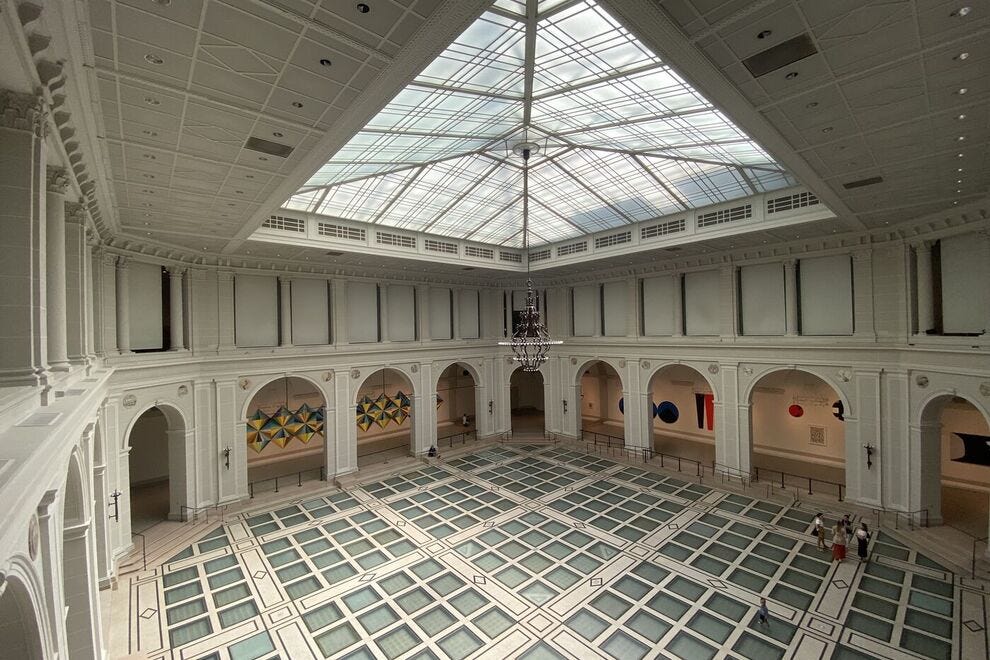 The Brooklyn Museum is located at 200 Eastern Parkway. It’s easy to reach via subway by taking the 2/3 line to the Eastern Parkway/Brooklyn Museum station, which is wheelchair accessible. Other subway lines will get you nearby as well, including the B/Q to Prospect Park station and the 4/5 to Franklin Avenue/Botanic Garden station.

The museum is open from 11 a.m.-6 p.m. Wednesday-Sunday, closed on Monday and Tuesday.

Virgil Abloh: “Figures of Speech” runs until January 29, 2023 and requires a timed ticket.

Get tickets for Virgil Abloh: “Figures of Speech” »