Green and fecund year-round, Florida could be considered one big Garden of Eden – tempting, fragrant, and juicy. In fact, in north Florida, Eden Gardens State Park feels suspiciously like paradise. There are no apple trees, but live oaks, on the other hand, drape the grounds in ethereal beauty and camellias bloom vibrantly.

In southern extremes, local lore dictates that the mango was the fruit that did Adam and Eve in (thus the name: Man! Go!). It proliferates at a number of gardens. Many of the state’s public gardens specialize in a particular seductive blossom, fruit or plant – from water lilies at McKee Botanical Garden in Vero Beach to orchids at Marie Selby Botanical Gardens in Sarasota – and this tour takes in 10 of them with tips on how and when to see them at their most spectacular.

When Thomas Edison convinced his friend Henry Ford to build a home next to his on the Caloosahatchee River in Fort Myers, the automobile mogul named it “The Mangoes,” after the trees that grew profusely in his yard.

Today, 18 different varieties of the sweet tropical fruit thrive throughout the grounds of the Edison & Ford Winter Estates, known for the gardens Edison first planted when he built his home there in the 1885. Mango season runs May through September, and the estates harvest the fruit to sell at its Garden Shoppe. 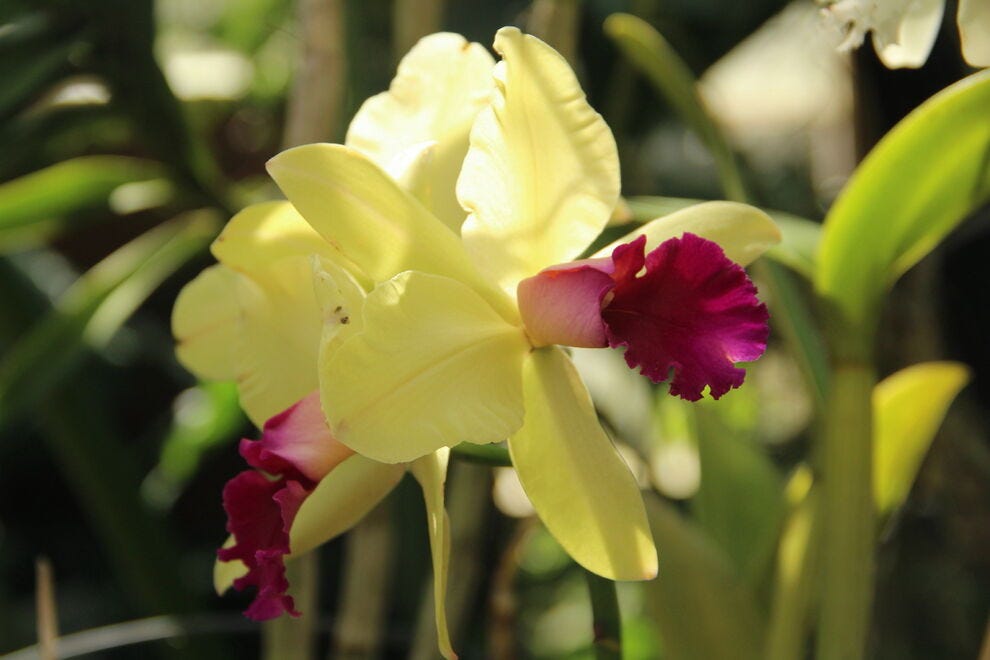 Orchids get most of the attention at Selby, where they grace greenhouses, the Tropical Conservatory and the grounds, but its bromeliads are equally important to the research and showiness of the waterfront gardens. Some 4,800 orchids and 4,100 bromeliads live there.

The orchids are rotated throughout the year to showcase those in bloom. The garden’s annual fall Orchid Show runs early October through mid-December with a different theme each year. Colorfully leafed bromeliads flourish outdoors on the ground and in trees. Different varieties become even showier as they bloom May through March. 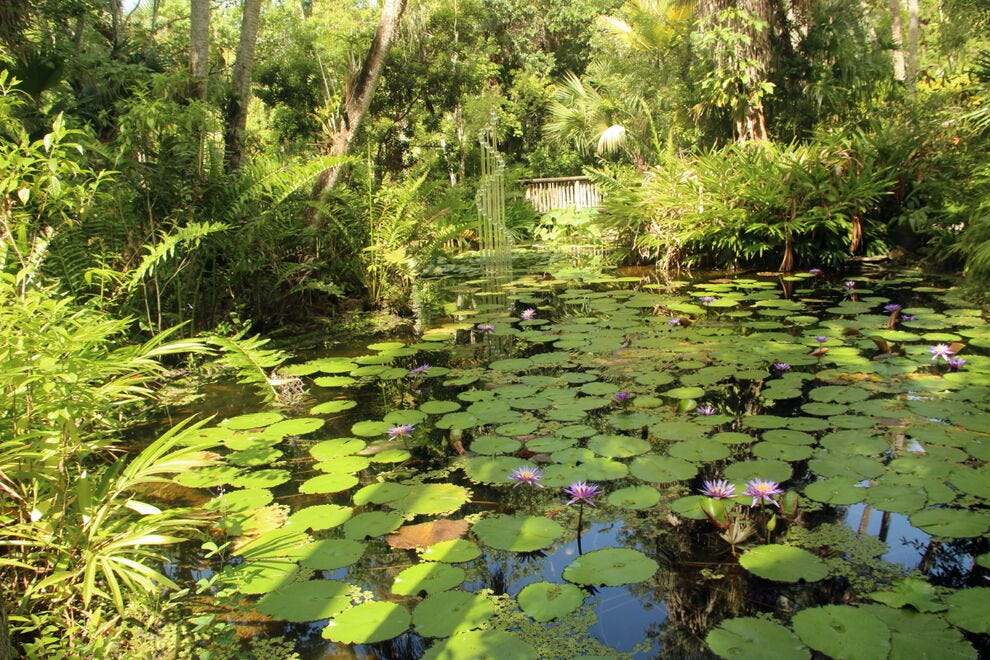 Like orchids and palm trees, water lilies are no strangers to South Florida gardens. McKee, however, boasts one the state’s largest and oldest collections. Throughout its stream- and pond-riddled grounds, more than 80 varieties bloom night and day – most aggressively in late spring and summer.

In fact, the garden celebrates the explosion of delicate flowers from lily pads, which range from side plate to super-platter size, in mid-June with its Annual Waterlily Celebration. 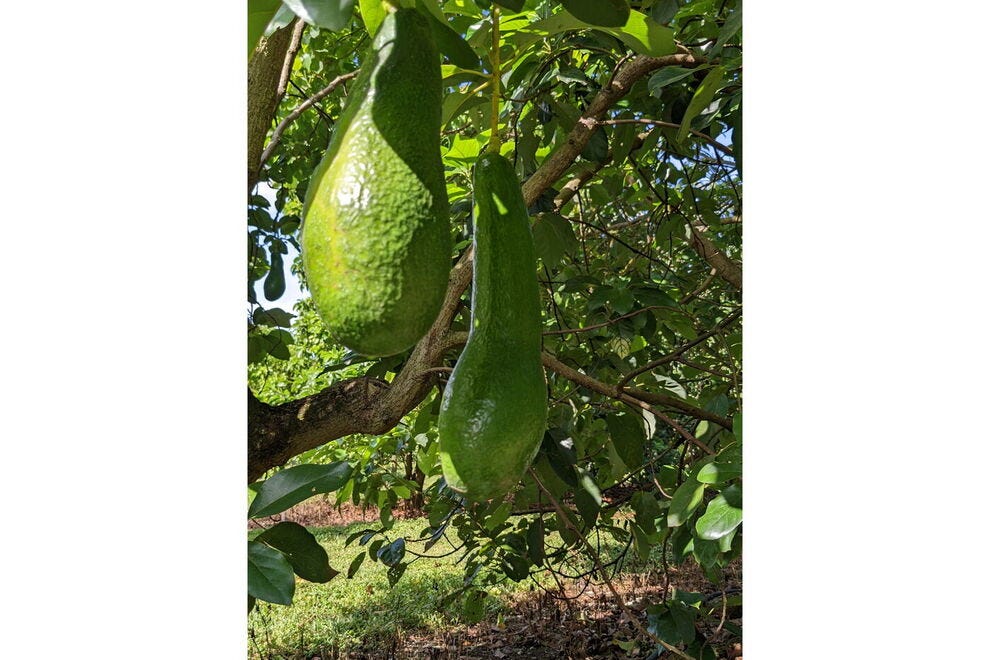 Avocadoes come in all shapes and sizes at Fairchild — Photo courtesy of Fairchild Tropical Botanic Garden.

Also known for its mangoes, which inspire an annual festival each July, Fairchild history sprouts from the avocado as well. In 2003, a local avocado farmer donated his 20 acres to the garden, which became home to its Fairchild Farm & Tropical Fruit Collection. Fifteen acres of the property, which are devoted to a model avocado production grove with approximately 150 varieties, are open to visitors with advance reservations. Peak season is July to September, when the garden sells its harvest on weekends. 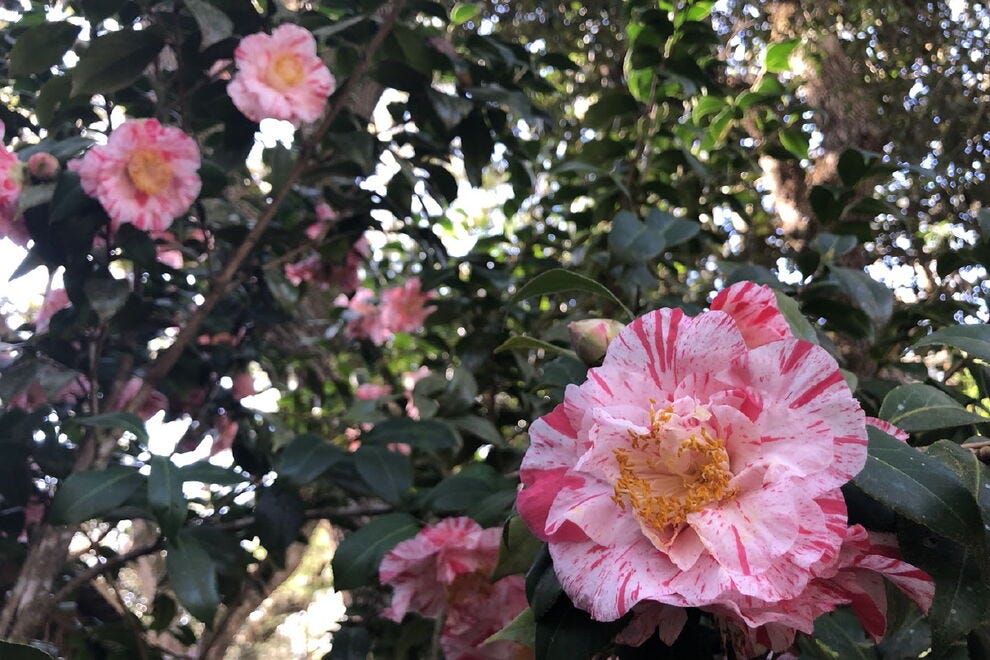 Wrapped around a stately, columned home, the 163-acre garden at this park in Florida’s Panhandle gets brightened every winter with the exquisite blossoms of the camellia bush. The park grows some 340 of the plants in 150 different varieties. The camellias begin to bloom in early November, and in February, the park celebrates their beauty with a Camellia Festival. Peak season runs January through March. 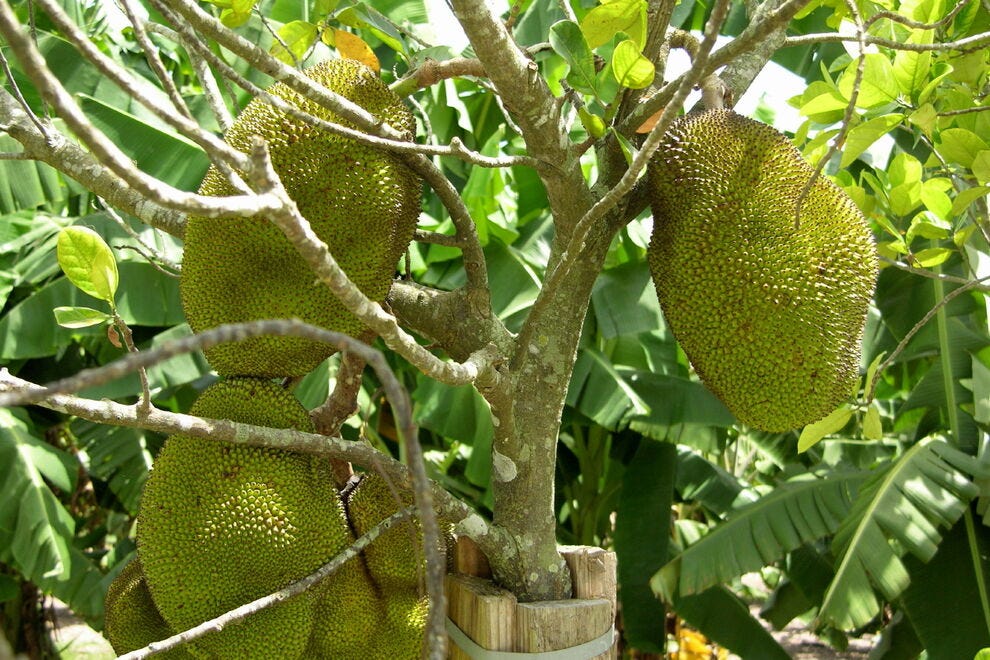 Homestead is famous for its farming, particularly its tropical fruit crops. At this county park, you can see a number of fruits, and one of the most popular is the enormous, watermelon-sized jackfruit. The tree grows in abundance at the park. Once little known, the jackfruit is having a moment right now as vegans put it to use as a meat substitute superfood. At the Fruit & Spice Park, its season runs through the summer. 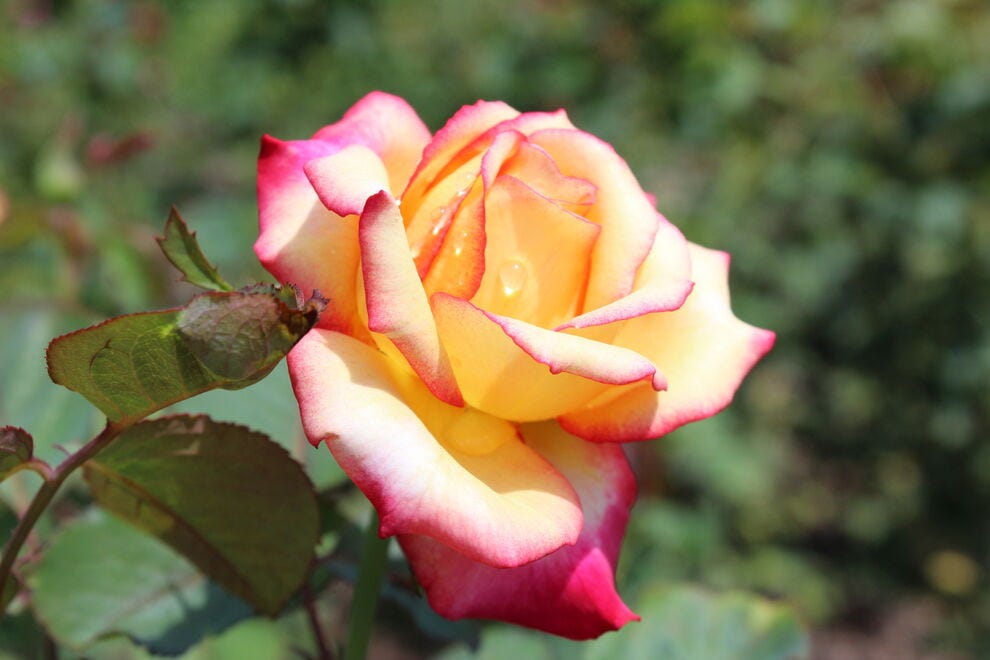 Not typically associated with Florida, roses are signature at Washington Oaks — Photo courtesy of Anita King

This state park not only promises you a rose garden, but also guarantees an average of 150 blooming plants scenting the sea air. Ten concentric circles hold beds, each with its own unique variety of rose ranging from ivory to deep red in color. The roses bloom most spectacularly in early May and continue through winter until cut back in February. They are freshest and most fragrant in the morning and late afternoon. 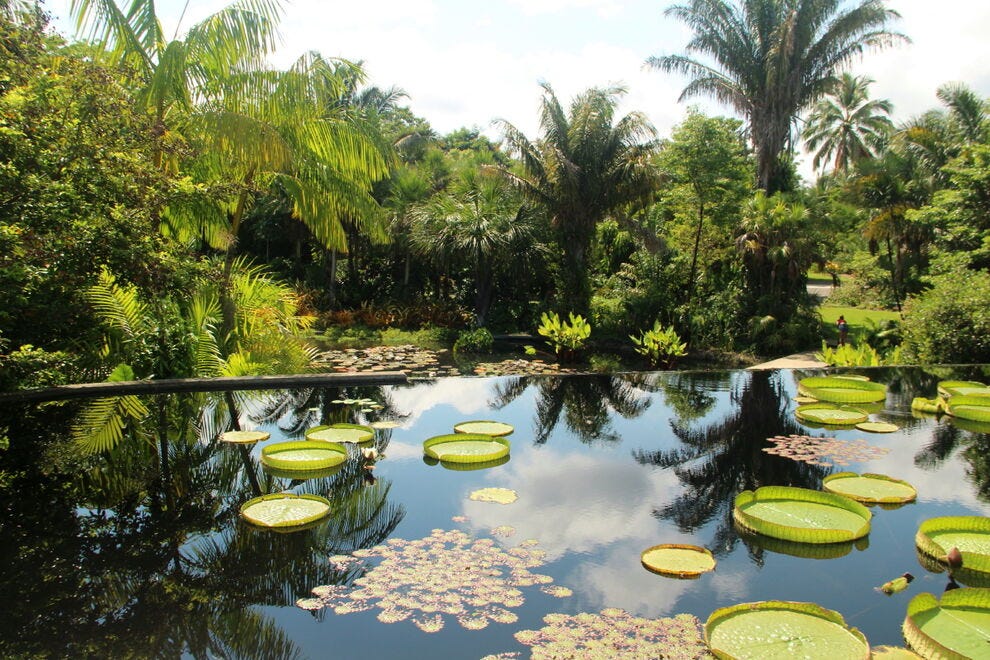 In its Water Garden and Kapnick Brazilian Garden, you can find some 500 specimens of water lilies, but the Victoria platter water lilies are the most magnificent. Their gigantic, crimp-edged leaves can reach up to 10 feet in diameter, and their oversized blossom ranges from white to pink. They bloom year-round, but most profusely in the summer months and usually at night, so try to catch them in the early morning or evening. 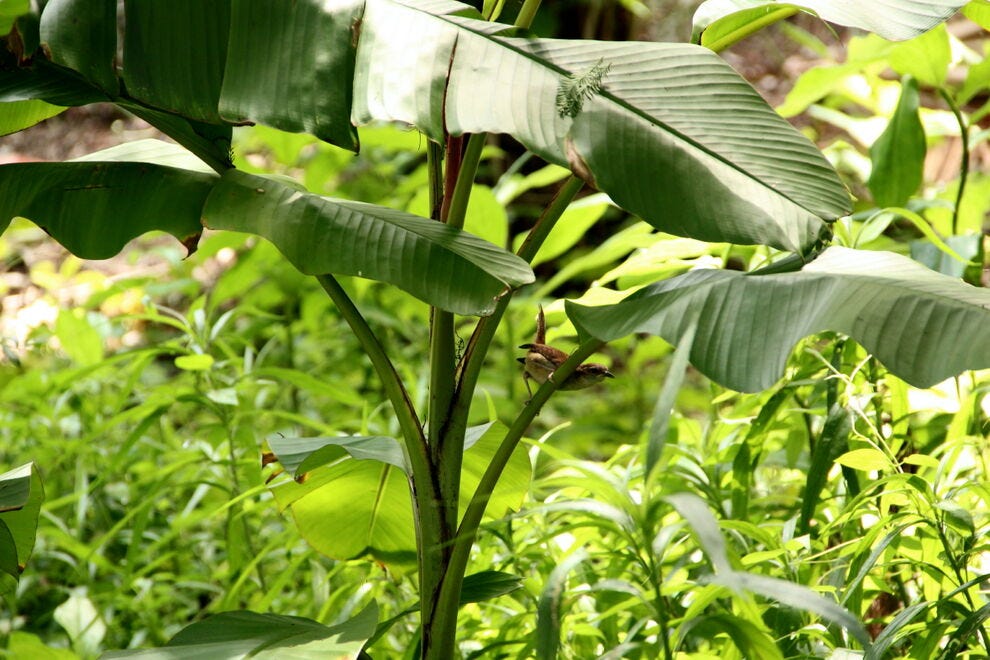 Central Florida is known for its citrus crops, so it’s no astonishment to find oranges and lime trees gracing the lovely grounds of this 50-acre lakeside estate. Bananas, however, bring a tropical surprise. Sounds like the makings of a delicious fruit salad, but the two fruits grow at different times of year. Citrus is a winter crop, while bananas, like most tropical fruit, flourish in summer from June into September. 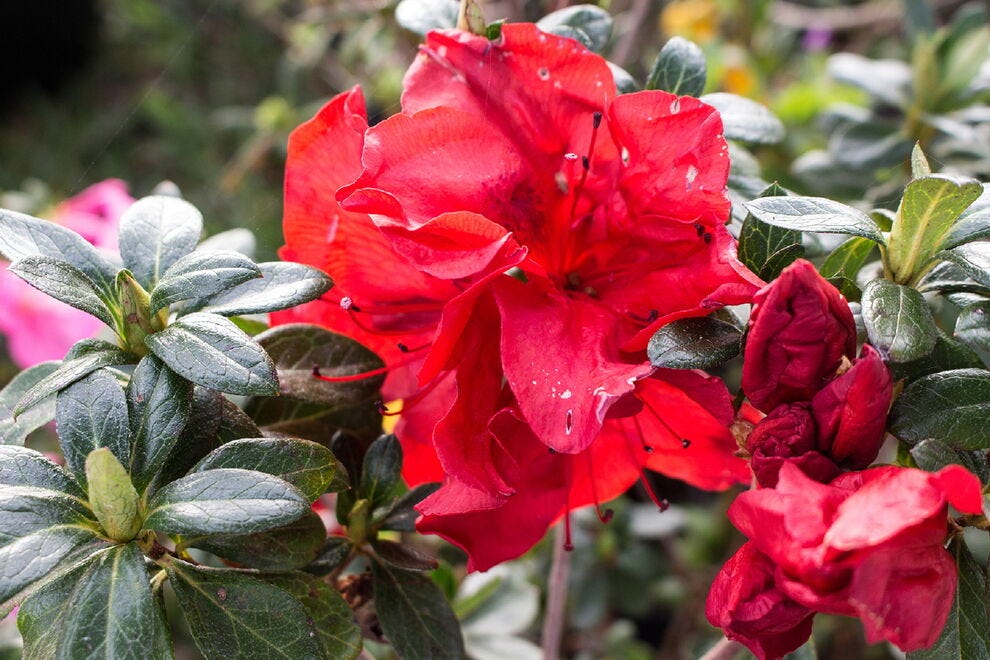 Iconic of northern Florida, azaleas bloom in spring. In the art museum’s formal gardens on the St. Johns River – complete with fountains, arbors, reflection pools and sculptures – several varieties in pink and red proliferate. Ephemeral as they are beautiful, the blooms last for only a week or two.